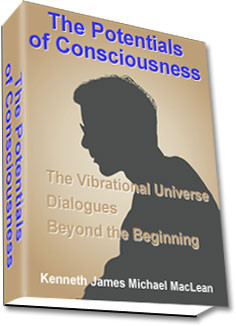 It is said that a human being only uses 10% of his or her potential. Find out about the other 90%

It is said that a human being only uses 10% of his or her potential. Find out about the other 90%!
The Potentials of Consciousness is a 3 eBook series that explores the capabilities of consciousness.

Book 1: The Vibrational Universe
Book 2: Dialogues-Conversations with my Higher Self
Book 3: Beyond the Beginning

Right off the bat, lets dispose of the myth that consciousness is biologically based.

Your self awareness is not dependent upon a pile of neurons. Some people have to die to finally figure that out, but I don't want you to have to wait that long!
Consciousness cooperatively coexists with the material world. Our society artificially separates science, religion, and spirituality, to the detriment of our species. The three subjects are really united. When we as individuals, and as a species, finally realize this we will be able to transform our lives and the face of our planet.
The Potentials of Consciousness series is the roadmap to a realization of your greater potential.

The idea that consciousness is biologically based is the BIG LIE on planet earth.
When a person believes that he or she only goes around once, it sets up an unconscious, deep seated anxiety.

If you've watched TV for any length of time, you can see that many advertisements play the fear card.
Our politicians and our government do the same.
Parents often use the fear factor when disciplining children. The ultimate threat is always: you might die. And we all know what that means -- the complete extinction of your conscious personality.
This fear, although based upon an untruth, is enough to terrify even an optimistic person! Oh, religious people tell us that there's an afterlife -- but how many of them personally believe it? How many of them truly know it?
By the time we reach adulthood, most of us have been thoroughly indoctrinated with the belief that death is the most horrifying thing that could ever happen. In Michigan, my home state, you can't even ride a bicycle without wearing a helmet -- because you might die, of course.

Our native American cultures, however, had no fear of death. Although they loved life, each man and woman implicitly understood that death is an illusion, allowing each one to live life to the fullest, knowing that self awareness continues even after the body's death.
The main reason for the separation of science, religion, and spirituality is an incorrect definition of consciousness.
This might seem esoteric and airy-fairy, but it's not! Consciousness is self-awareness. It's YOU. But nobody seems to know what consciousness is or where it comes from. Whenever there is a fundamental confusion about something, it leads to big problems.
Look at planet earth. It certainly appears that our species is confused, does it not? We are confused on the most basic, fundamental level, because we've forgotten who we are.
How can you get on successfully in life when you don't even know who you are? It's like taking a test without reading the material. It's like trying to play a game when you don't even know the rules.
When consciousness is defined correctly, science, religion and metaphysics come together like ice cream and chocolate. And when that happens, you discover your personal power source!
Discovering who you are doesn't have to be arduous.
In fact, it can be a lot of fun! The fact is that every single human being on this planet already knows his or her eternal, divine nature. All that is necessary is a little reminder.

Am I some kind of mystic or guru! Hell no!! I'm just a regular guy who, with the help of a lot of really smart people, discovered a greater part of myself. And so can you.
It's not that hard, really it's not. You don't have to memorize a secret code or perform mysterious rituals. That's because, deep down inside, you already know what I'm going to tell you. But sometimes, having another person say it can jump-start your awareness of self.

The Potentials of Consciousness is designed to do just that.